Why do I need to bridge or a couple of real life cases when you may need an alternative to built-in Windows network bridge.

Over ten years has passed since I have published the first version of Ethernet Bridge. The main purpose of this simple tool, inspired by Steve Gibson from Gibson Research Corporation, was supporting OpenVPN in bridging mode on Windows 2000. Native OS support of network bridging was introduced in Windows XP/2003 and I had not seen much sense to port Ethernet Bridge to more modern operating systems. However, growing interest to cloud computing and virtualization discovered some new applications where built-in Windows network bridging support can be insufficient.

Let’s look at one such a case. Assume that we have two laptops connected with Ethernet switch or direct cable. One of the laptops is also connected to Wi-Fi and we want to share this Wi-Fi connection for the second laptop (Figure 1).

Of course we can use built-in Windows Internet connection sharing or any other NAT based solution like Internet Gateway.But what if we want to have the second laptop in the same LAN segment? And this is where built-in Network Bridging may help. We just bridge LAN and WLAN connections on the first laptop and get second laptop magically connected to the same LAN segment (Figure 2 and Figure 3): 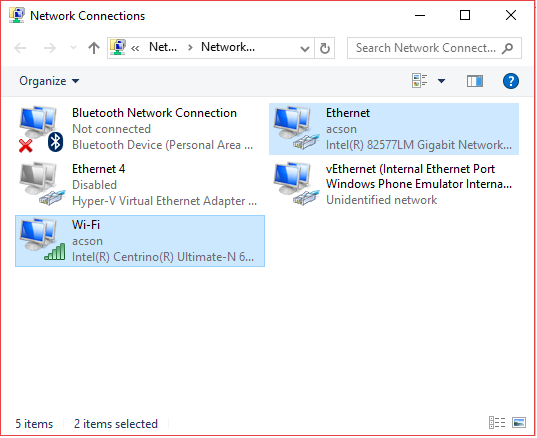 As you may notice on the Figure 3 below, instead of two network interfaces you virtually get a single one connected to both LAN and Wi-Fi simultaneously. 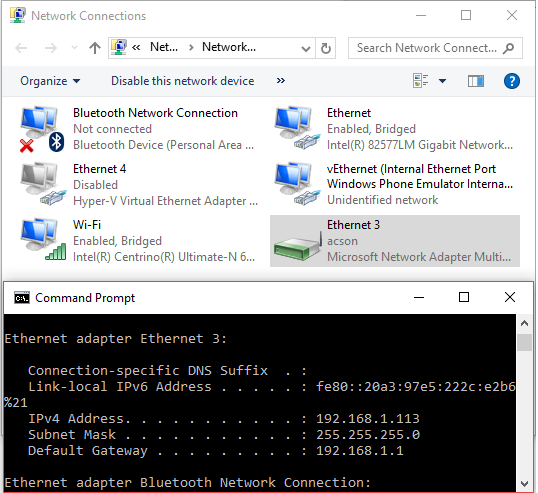 So far so good, but as you may already know Windows 8 and later client Windows systems (as well as Windows Server 2008 and later Windows server systems) include a Hyper-V  hypervisor which can create guest virtual machines. Besides other details, in order to get your virtual machine connected to the network you have to create so called virtual switch. On the Figure 4 below I have created a virtual switch connected to Wi-Fi network interface. As a result Windows has created a virtual network interface vEthernet(WLAN) where WLAN stands for the name of the Hyper-V virtual switch and which is connected to the wireless network. 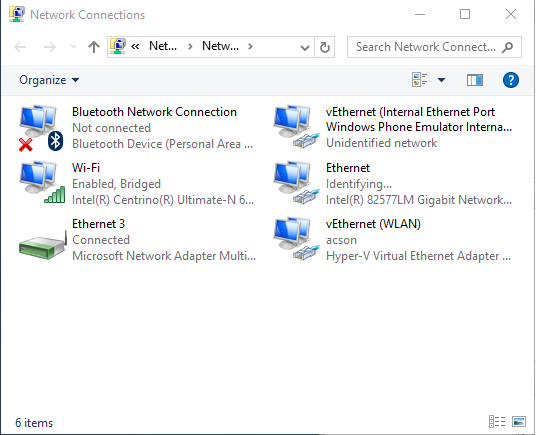 What if I try to bridge Ethernet and vEthernet adapters now? Of course I would expect it to work the same way as in the previous case where we had no Hyper-V virtual switches and my second laptop would get connected to Wi-Fi LAN segment. 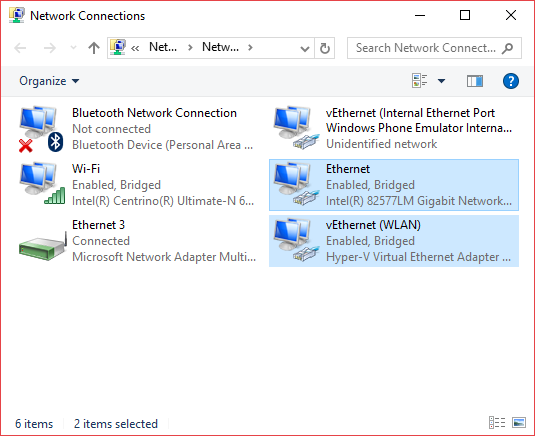 Windows agrees to add Ethernet adapter to the bridge (Figure 5) but instead of having second laptop connected I have lost network connectivity on the first laptop and could restore it only after removing Hyper-V virtual switch from the system. In this particular case it means that I can’t have virtual machines running under Hyper-V connected to Wi-Fi and at the same time have my second laptop bridged to Wi-Fi connection.

Another possible situation when Windows built-in network bridging support can be insufficient include (but not limited to):

The complete source code for this project is available on GitHub. You can just download it from there, build and run. Please note that this application requires Windows Packet Filter driver installed. You can download it from the official web-page. Here I’m going to provide some general overview and highlight important details. And the first thing to note is that there  are two slightly different cases: when you want to bridge two Ethernet network adapters and when you bridge Wi-Fi connection.

This looks pretty straightforward.  Just put both network interfaces into the promiscuous mode and duplicate packets from first network interface to the second and vice versa. For the Ethernet Bridge sample application I create two working threads. Each thread is filtering on primary network interface and duplicates packets to the secondary. The code below is fairly simple, it does not try to prevent network loops by using Spanning Tree protocol which you may consider to implement when building production level Ethernet Bridge. Just tries to avoid some unnecessary packets indications to avoid loopback loops. The code fragment below is the main processing cycle of the working thread:

So far so good and if you are to bridge a couple of Ethernet network interfaces then this is sufficient.

The code above does Ethernet bridging transparently (doesn’t modify outgoing or incoming frames) but it won’t work when you need to bridge wired and wireless networks because most Access Points (APs) will reject frames that have a source address that didn’t authenticate with the AP. The solution is MAC address (also known as physical or hardware address) translation between wired LAN and Wi-Fi:

Here is the resulted code:

As you may already have noticed this code has some special processing for ARP and DHCP protocols. And probably it needs some explanation:
ARP (Address Resolution Protocol) is used for resolution of Internet layer addresses into link layer addresses. Assuming that peer with IP address 192.168.1.11 wants to communicate to 192.168.1.1, it asks using ARP protocol:”Who has 192.168.1.1? Tell 192.168.1.11!” and broadcasts this packet on the network. And when 192.168.1.1 receives such a requests it replies to 192.168.1.11 with ARP reply telling its MAC address.
Since ARP is used for mapping a network address (e.g. an IPv4 address) to a physical hardware address like an Ethernet address (also named a MAC address) and we translate MAC addresses between LAN and Wi-Fi then we also need to properly adjust information transferred by ARP protocol as the following:

The Dynamic Host Configuration Protocol (DHCP) is a standardized network protocol used on Internet Protocol (IP) networks to dynamically distributes network configuration parameters, such as IP addresses, for interfaces and services. In a few words, when your laptop connects to Wi-Fi, DHCP server in Wi-Fi network (typically running on Wi-Fi access point or router) assigns your laptop an IP address, configures the default router and DNS servers. In order to allow hosts in LAN to obtain IP addresses using DHCP we normally forward their DHCP requests to Wi-Fi network. The small block of DHCP related code above converts unicast DHCP requests to broadcast ones, because in case of unicast requests DHCP server will reply to the physical address of the requester directly what does not make sense since this physical address is behind the Wi-Fi adapter and DHCP response will never reach the requester. Although this block of code can be safely omitted because if system fails to get and IP address with unicast DHCP request then it switches to broadcast after small timeout. So we just speed up the things a little. 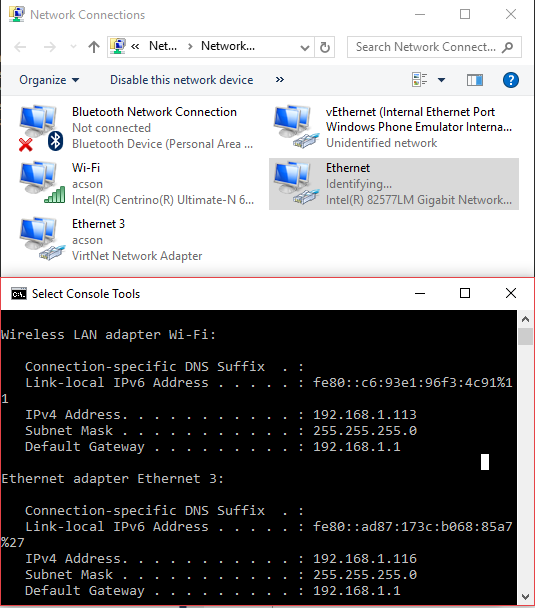