Windows Packet Filter (WinpkFilter) is a high performance packet filtering framework for Windows that allows developers to transparently filter (view and modify) raw network packets at the NDIS level of the network stack with minimal impact on network activity and without having to write any low level driver code.

Key advantage of Windows Packet Filter in comparison to other packet filtering frameworks for Windows (based on Windows Filtering Platform (WFP) callout drivers, Layered Service Poviders (LSP), TDI filters and etc..) is the ability to manipulate raw Ethernet frames achieved by installing driver below all network protocol drivers and just above network interface driver. Thus WinpkFilter driver has an ultimate control over all network traffic flow destined to or originated from your system and allows you modify any packet, drop it or even forge and insert a completely new one. Using Windows Packet Filter requires no experience in kernel mode programming on your behalf since it provides you with a powerful user level API. However, if you need to implement your solution (to achieve better performance) in kernel mode, you can do that as well by adding your functional code directly to Windows Packet Filter driver’s code.

The following connections types are supported for the operating systems above: 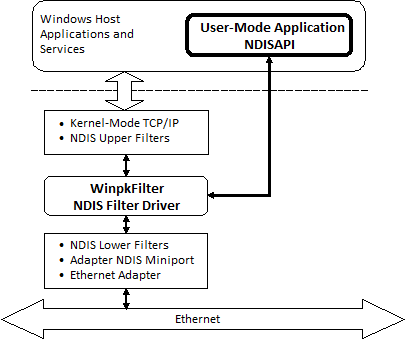 Windows Packet Filter can be used as a base for the following kinds of network applications (including but not limited to):

You can download Windows Packet Filter driver installer (free for private or educational use) and samples binaries in order to test and evaluate the reliability and performance of our software.

The source code for Windows Packet Filter samples along with the latest NDISAPI library is available on GitHub.

We offer two types of licenses. Each license includes one year of free updates & support and custom driver’s build*.

Please be very careful when choosing the license type:

Notes:
* – You may need custom build of WinpkFilter drivers if you are going to redistribute helper drivers as a part of your software. Custom builds allow avoiding any possible conflicts with other WinpkFilter based applications. If you have purchased Developer license you can request custom build by sending e-mail to support@ntkernel.com. One custom build per license is included in Developer and Source Code subscriptions. Additional custom builds are subject of extra charge 100 USD per build.

If you are already WinpkFilter customer, but your support plan is out-of-date, then you can renew it using the links below (please note that NT Kernel Resources may request your previous order ID and date for confirmation):

Windows Packet Filter software is supplied AS-IS, without warranties of any kind.